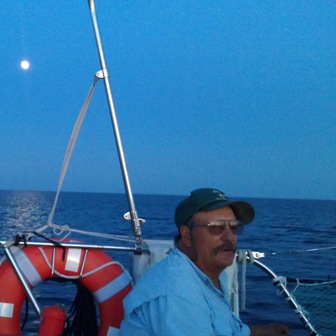 Captain Steven Perkins was born and raised in Wells to a family whose ties to the ocean around Wells Bay go back 200 years. He assisted his father and grandfather in clamming and lobstering before college and worked on a party boat and dragger during school vacations. After completing a BA, Steve earned his USCG Captain’s license and soon had his own vessel. He worked the party fishing trade summers and rigged his boat for commercial fishing in the winters for several years out of Perkins Cove in Ogunquit. Before long he bought a steel dragger and moved to commercial fishing full time. For the next 25 years, Steve prospered in his field, eventually owning two large steel draggers. He moved the boats to fish out of Gloucester, Massachusetts, home of American fishing since the early 1600’s.

Over the years, Steve and his wife Judy vacationed on sailboats whenever possible, chartering sailboats in the US Virgin Islands and in Downeast Maine. In August 1999, they found and bought their own 34’ Tartan sloop: The Gift.

After 11 years of sharing the fun of sailing on the Tartan with wonderful people from all over the globe, they were ready for a bigger boat. They had admired a friend’s 40-foot Passport yacht for years. In the late fall of 2010, they bought her and spent that winter revamping her for the commercial trade. The Passport 40 is a world-class sailing yacht, very stable and roomy, with luxurious amenities. Today The (new) Gift is certified to carry 12 passengers. Reserve your spot today for a relaxing sail aboard this plush vessel.

The Gift sails out of quaint Perkins Cove, Ogunquit, Maine, where you may experience the peacefulness and excitement of sailing. Steven has had his USCG Captain’s license for over 40 years, has extensive knowledge of local waters, and has spent the last 55 years working year-round on the ocean off Maine, New Hampshire and Massachusetts.